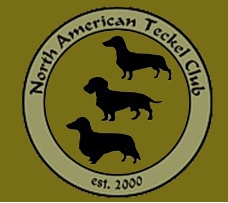 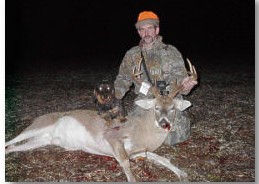 A successful team - Al Diehl and his wirehair Bella

In many European countries a hunter is required by law to use a tracking dog, which helps him find wounded big game. In much of the United States blood tracking with a dog, even on a leash, has been a prohibited activity, outlawed at the time of the general abolition of the use of dogs in deer hunting. However, in the last twenty years quite a few states have passed legislation allowing big game hunting with leashed dogs. For many hunters the dachshund has become the breed of choice.

Dachshunds work close to the scent line, which is a big advantage for the handler who has to know where and how the deer is hit. This is the case in most of the Northeast and Midwest where bow hunting is very popular and blood tracking with a leashed dog has been legalized. Especially in bow hunting retrievals it is tremendously important to see what little blood sign there is, what it looks like and where it is placed. If the tracking dog just drifts the line fast, going where the deer went, a hunter may never know whether he has a one lung hit, a stomach shot or a muscle wound. He may use the wrong tactics on the deer, or may spend all night on a deer that is not mortally wounded and which he is not going to catch. A good dachshund will show the visible blood on the ground and will go close to where it has rubbed off on weeds and sapplings 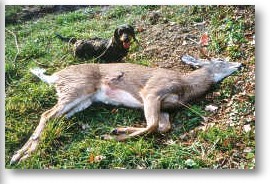 The biggest problem in finding wounded deer is keeping the dog on the right line. Hot lines and warm lines of healthy deer will distract the dog away from the old, cold line of the wounded deer. In the daytime there are turkey flocks that leave a cloud of strong scent that can drive dogs crazy. Dachshunds, with some training and experience, can discriminate very well, and they bring to the tracking task a hound's nose for ground scent. Dachshunds tend to be easy to read by their body language and by the way they are using their nose. They work silently unless the wounded deer gets up and moves out right ahead of them.

Dachshunds are small and handy. They ride on the front seat of a pick-up and they love to ride on a four wheeler. The little dog can go under the thick thorny stuff, and does not get torn up like a big dog would.

There are breeds and types of tracking dogs suited for different parts of North America. In a good part of deer hunting country, especially in the northern areas, where a tracking dog is required to be on leash, the dachshund makes a lot of sense and will more than hold his own against any other breed. 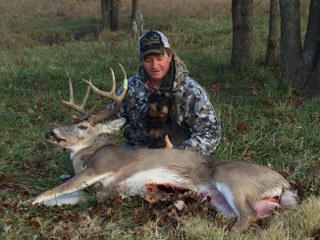